Tom Ford Beauty Metallic Denim Eye Color QuadTom Ford Beauty Metallic Denim Eye Color Quad ($88.00 for 0.35 oz.) includes two warmer, shimmery neutral hues with two deeper, more intense shimmery hues. The third shade looks bluer in the pan than in practice, as the base was quite dark and charcoal-like. The formula on three of the four shades felt a little drier and thinner with less slip compared to most of the brand’s gel-powder eyeshadows. This resulted in sheerer coverage, fallout, and/or less longevity. 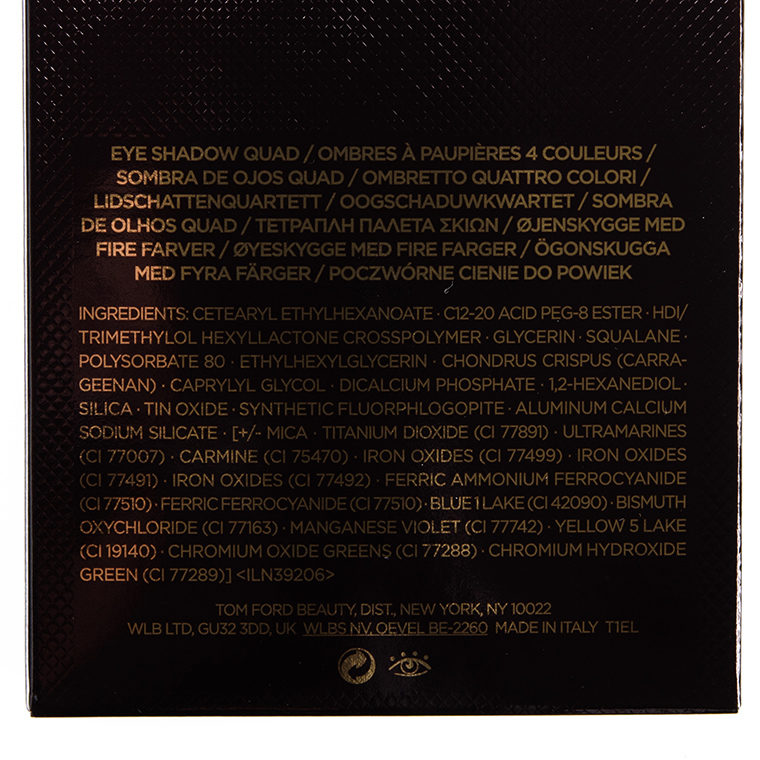 Metallic Denim #1 is a light gold with moderate, warm undertones and a sparkling, metallic sheen. It had sheer color coverage applied dry and more medium coverage applied with a dampened brush or a fingertip, but it was a departure from the gel-powder hybrid formulation, which tends to be smoother and more pigmented.

There was a dryness present, likely due to the larger flecks of sparkle in it, and this functioned more as a brightening or layering shade to add sparkle. It lasted for eight hours but had light fallout over time.

Metallic Denim #2 is a light-medium, golden bronze with warmer undertones and a sparkling, metallic finish. The texture was soft, smooth, and moderately-dense, but it was a little drier compared to the usual formula, so I had a little fallout. It had opaque color payoff applied wet as well as dry. It wore nicely for eight hours before fading noticeably.

Metallic Denim #3 had more of a deep, charcoal base with bluish-teal pearl and fine sparkle throughout. It had semi-opaque color payoff applied with a dry brush and more opaque, higher-shine coverage with a dampened brush.

The consistency was drier, more powdery, which was unexpected as this formula tends to have good glide and a little creaminess to it, so I had some issues with fallout and the color looking more faded on my skin from the get-go. It stayed on decently for seven hours before fading visibly.

Metallic Denim #4 is an intense black base with flecks of fine, silver sparkle throughout. It had opaque pigmentation regardless of dry or wet application, and the product adhered well to bare skin with very minimal fallout when blended out along the edges.

The texture was moderately dense, smooth, and had light slip, though it still felt a little drier than expected based on past experience with this formula. It lasted well for eight hours before fading a bit.

Dr. Yvette Williams Talks About Her Moment with Disturbed on ‘FRS’

Yankees ‘one of the most aggressive…

Activision Blizzard is trying to get the…