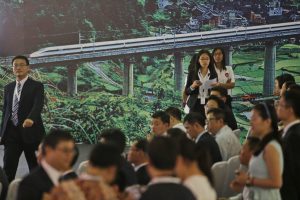 Guests walk past an artist depiction of model of the high-speed train which will connect the capital city of Jakarta to the country’s fourth largest city, Bandung, during the groundbreaking ceremony for the construction of its railway in Cikalong Wetan, West Java, Indonesia, January 21, 2016.

Indonesia will use the state budget to cover the spiraling cost overruns on a Chinese-backed high-speed rail project that has experienced repeated delays since its inception six years ago. In a decree last week, President Joko “Jokowi” Widodo authorized the government to put state funds into the Jakarta-Bandung High-Speed Rail project, part of Beijing’s headline Belt and Road Initiative (BRI), overriding a 2015 decree that barred the use of state funds in the project.

The Jakarta-Bandung railway project was conceived in September 2015, when the Jokowi administration awarded the contract for a high-speed rail line to a consortium of Chinese and Indonesian state-owned enterprises known as Kereta Cepat Indonesia China (KCIC), rebuffing an attractive Japanese alternative.

As was pointed out in this article in Nikkei Asia, one of the main reasons Indonesia chose the Chinese proposal was that it required no financial contributions or guarantees from the Indonesian government. But the project, which was reportedly 78 percent complete as of mid-August, has since been plagued by delays and cost overruns that have wiped out this initial advantage.

Indonesia initially expected construction on the 145-kilometer line to cost $5.5 billion and be completed by 2018. The project’s estimated cost has increased to $7.9 billion, according to state-owned railway operator Kereta Api Indonesia (KAI), which is part of the KCIC consortium.

How much the Indonesian government will end up paying is unclear; one earlier report said that it intended to contribute the equivalent of $287.5 million next year to partly pay for the project’s cost overrun, though it may indirectly take on additional, indirect liability if additional overruns are absorbed by the state-owned enterprises that make up KCIC.

While there will be many Western analysts ready to describe the project as the latest case of Beijing wielding “debt trap diplomacy” against nations in the Global South, the delays appear to be the result of  more mundane issues like poor planning and unsurprising, if avoidable, challenges. One KAI official told parliament last month that most of the price changes were due to the likes of materials and machinery, as well as delays caused by the complex process of land acquisition in the heavily bureaucratized Indonesian political system. The COVID-19 pandemic has further stalled the project.

Ali Mochtar Ngabalin, a presidential spokesperson, told CNN Indonesia that Jokowi was determined to see the project through. “What’s wrong with using the state budget for a national strategic project so that it can be completed on schedule?” Ngabalin reportedly said.

Get briefed on the story of the week, and developing stories to watch across the Asia-Pacific.

But the decision has prompted criticism from economists and political opponents of the Jokowi administration, who have suggested that the project could drain Indonesia’s national accounts.

On October 12, the Jakarta Post editorial board said that Jokowi should personally raise the issue with Chinese President Xi Jinping during the Group of 20 Summit in Rome at the end of this month. It said that this was necessary “for the sake of the countries’ bilateral ties and for the interest of China’s global credibility.” It added, “The railway project is too big to fail, but it is also too costly to continue.”

The decree has also prompted others to question Jokowi’s decision to extend an invitation for Chinese firms to become involved in a planned extension of the rail line eastwards to Surabaya, Indonesia’s second-biggest city, in East Java.

In 2019, Indonesia granted Japan project to build the Surabaya line, but last year Jokowi expressed  hopes that China could be a partner in the project for financial reasons. “It is our hope that the Jakarta-Bandung high-speed railway can be extended into a Jakarta-Bandung-Surabaya high-speed railway,” Luhut Pandjaitan, the coordinating minister for maritime affairs and investment, said at the time.

While the future of the Surabaya line remain less certain, the troubles around the Jakarta-Bandung portion of the railway are unlikely to have much long-term affect on  relationship between Jakarta and Beijing. despite tensions in areas of the South China Sea adjacent to Indonesia’s Natuna Islands, the two nations enjoy a considerable degree of economic complementarity, with China’s BRI gelling well with Jokowi’s plans to modernize Indonesia’s infrastructure.

Given the railway’s political importance for both the Chinese government and the Jokowi administration, and the advanced state of the construction, there is little chance that the project won’t be completed. Jokowi and Xi also enjoy a close personal relationship that will ensure that the project is brought to a satisfactory conclusion. But the Indonesian side could nonetheless end up paying a lot more than it initially bargained for.

XRP PUMPING to the MOOOOOOON!!! (Secret Truth Behind Ripple Price)

Economy on the Brink, Taliban Rely on Former Technocrats – The Diplomat

AUKUS Is Only Half the Equation – The Diplomat

Activision Blizzard is trying to get the discrimination…

How to Style Broad Shoulders &…