Where will today’s technologies lead us over the next 20 years, and what will an AI-infused world look like across the globe? Sinovation founder and AI thought leader Kai-Fu Lee and breakout sci-fi author Chen Qiufan (AKA Stanley Chen) make an educated guess in “AI 2041,” a set of 10 stories and 10 essays exploring and explaining the potential and pitfalls of AI.

After reading the book — I’ll be publishing a review shortly — I talked with Lee and Chen at TechCrunch Disrupt 2021 about how the collaboration came about, how their points of view coincided and differed, and why they think the future will be how they describe it.

(Quotes have been lightly edited for clarity.)

Lee and Chen found each other a few years ago — one a successful thought leader and entrepreneur in AI, the other an author whose incisive depictions of near-future dilemmas earned him international acclaim. They decided to collaborate on a hybrid work that would have narratives born out of informed speculation and expository pieces illustrated by narrative. 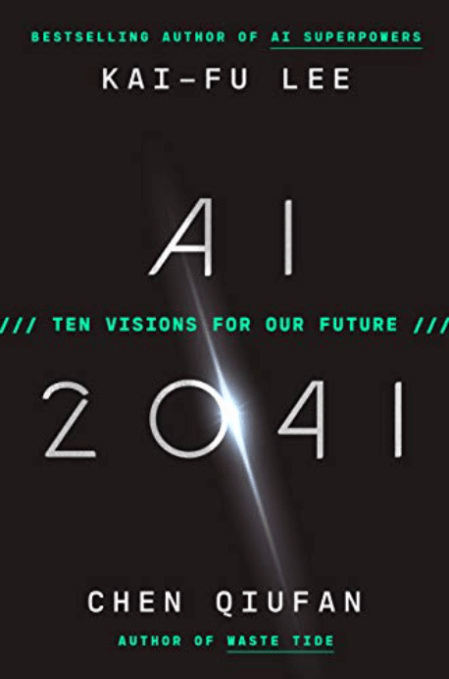 “It’s really to tell the whole story of AI, because AI is so important. Everyone should know more about it, but it’s also a little bit intimidating because it sounds technical,” Lee told me. “And what better way to tell the story than by truly telling stories?”

“We knew each other briefly back in the day in Google, and I was always thinking about writing a book about future technology, based on very specific science, facts, and theories,” Chen said. “But without Kai-Fu, I couldn’t do that, because I’m not the expert in the domain.”

The result of their collaboration is “AI 2041”: 10 stories by Chen set in the titular year, all over the world, with people from all walks of life encountering AI in the many ways that the authors think it may come to shape society over the next two decades. Each story is followed by an explanatory essay by Lee that goes into the technical aspects and why they might lead to that future.

The stories are independent but happen in something like a shared world, each illustrating a potential application, conflict, or change in thinking that AI could lead to. Importantly, the AI is recognizable as an evolution of existing technologies.

“We started with a framework of four things,” said Lee. “One is I wanted to cover around 15 technologies in 10 stories. I also wanted to order them so that they go from easy to hard, so it’s kind of like an AI textbook — you know, you learn it by reading stories. Then we both wanted it to be in different industries, like education and healthcare and so on, to show that AI impacts everywhere. And then lastly, Stanley wanted it to be in 10 different countries.”

Take for example the story “Gods Behind the Masks.” It concerns a talented deepfake creator working out of Lagos who knows the ins and outs of generative adversarial networks, image inspection, media pathways, and so on. He is tasked with creating a video of a long-dead celebrity that fools not just people watching it, but the hosting service’s automated scanners, the government’s facial recognition algorithms, and all the rest — but he begins to suspect there’s an unsavory motive behind it all (I won’t spoil the rest).

How our startup boosted productivity with ‘get s*** done’ day – TechCrunch

How our startup boosted productivity…

Dbrand pulls its PS5 Darkplates from…